Chris and I went out to Portland, Oregon to visit my brother, sister-in-law and my adorable, just over one year old nephew, Trent. It’s safe to say plenty of good times were had.

We arrived late Tuesday afternoon. After getting through the airport to get our bags, taking a Lyft to pick up our car, and then driving through after work traffic to get to my brother’s, it was… Dinner time.

Thankfully my brother and sister-face (inside joke) know pleeeeeenty of good spots. We ended up actually going to Pour Craft House, where you can order food from nearby restaurants. We also had picked up some Japanese pastries from Oyatsupan next door, so Chris and I settled on sharing nachos while enjoying some awesome craft brews. Definitely check out Pour Craft House if you’re in the area – Well worth the visit.

The pastry is known as Mt. Hood, named after Portland’s neighbor mountain. On the tray is Everybody’s Brewing Sprinkles, Thunder Island Brewing’s Covfefe, Ancestry Brewing’s NW Red, and Saint Archer Brewing’s Blonde Ale. My favorite was Oats and Hoes by 54°40′ Brewing Company (not in photo); a delicious, well made oatmeal stout.

After this, we ended up heading back to my brother’s to ultimately hit the hay – Trent was up past his bedtime and we too were pretty sleepy (still running on Central time).

Wednesday was my first Portland run in a while and boy did I miss it. (FYI – I lived out in Portland for a year while attending culinary school. There’s your fun fact of the day.) It is so much cooler and less humid there, so even hitting the hills didn’t seem so bad. 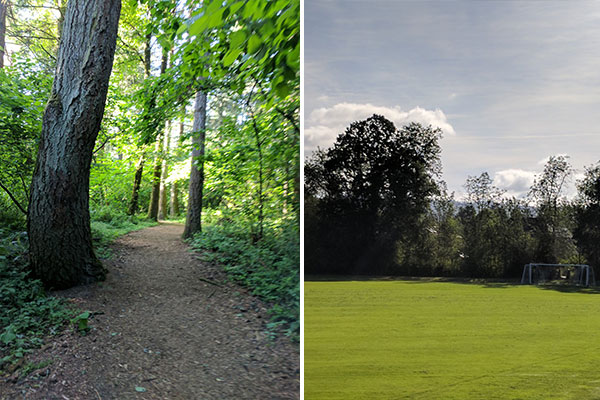 Afterwards, we WERE going to hit the Japanese Gardens… However, apparently that day was one of the first days of nice dry weather in Portland. ALL of the parking was taken up – So we moved onto Plan B: We hit a public parking garage, got on the MET transit and heading downtown.

Since this was Chris’ first time in the area ever, we had to show him all of the tourist-y things. First: Powell’s Books. If you haven’t been, Powell’s Books is known as one of the largest book stores out there. Downtown’s location has AT LEAST six floors worth of books. I ended up picking up the fourth copy of Stumptown (had to happen) and Chris got another Star Wars graphic novel he needed. 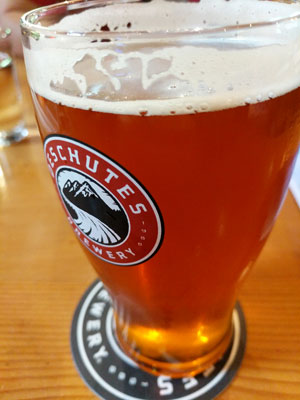 Afterwards was lunch time. We ended up stopping at Deschutes Brewery. Funny story: We were all looking at the lunch specials, and someone brought up the grilled cheese sandwich with tomato soup side. You’ll never guess what ALL of us got. So good, especially with that Tillamook cheese… (Yes, we’re all secretly kids.) While we were there, I had the Smash Berry Toast: very good pale ale with a slight berry kick at the end. Yum.

Afterwards we took the Streetcar to NW 21st and 23rd street to check out all of the small shops and to walk off the so good, but so big grilled cheese sandwiches. The full stomach didn’t stop us from hitting up Salt & Straw for some fun ice cream flavors. I ended up with Amaretto Cherry, once again, REALLY good (and vegan!).

It’s hard to go to Portland and have bad food/beer. They know how it’s done.