A little over a month ago, my cousin, Stephanie, sent me a message with a link to a site – imagine cycling and kayaking up in Traverse City… With breweries in between.

Very quickly afterwards, we picked a date and it was planned.

This past weekend was my first time in Michigan. As we drove up north, I was reminded of Portland with the amount of trees we drove by – it was beautiful. Chris and I drove up most of the way and stopped in Big Rapids, a little over an hour away from Traverse. We arrived in the evening and after doing a quick Google search, found our dinner place only about 20 minutes away. 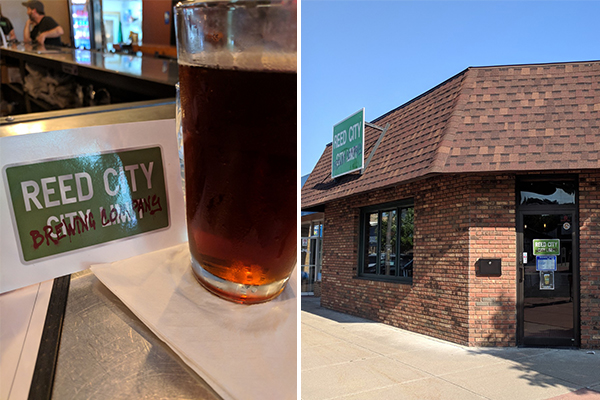 I’d say we definitely scored big at Reed City Brewing Company. We arrived, sat at the bar and quickly found out the bartenders were super cool and knowledgable. We got some pretty tasty pretzels and nachos (my favorite brewpub meal) as well as several of their brews. I ended up getting their Irish Red, PB Porter… and their Brown Ale (had to have #3 after trying a sample). All three were really good – the Red had some good malts behind it to bring out its flavor, the PB Porter held some delicious peanut butter behind it without being too heavy and their Brown was smooth and flavorful.

We made it back to the hotel for the night and headed off the next morning to Traverse City to be in town for our Kayak, Bike and Brew tour with Stephanie and her boyfriend, David. 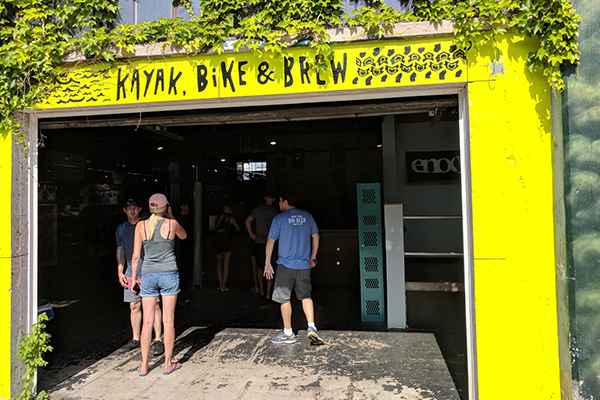 We were able to get checked in and picked out our bikes. I knew this was the one for me. And a-way we went. 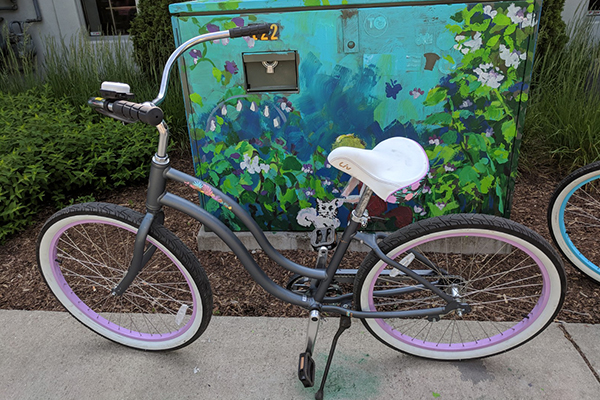 We rode about three miles alongside the lake and got to enjoy the ocean breeze on a very hot, 90 degree weather day. We arrived at our first stop – Right Brain Brewery. 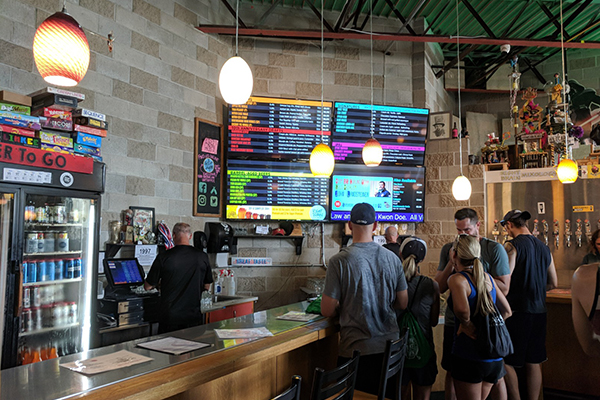 The brewery had a really cool atmosphere with a lot of fun, nerdy references throughout – like a tie-fighter as well as Homer Simpson hanging from the ceiling. Chris and I ended up sharing a sampler tray – 6 different beers, 6 oz each. We ended up with the Thai Peanut – a brown ale with a slight peanut butter taste and a kick at the end (I loved it, Chris did not), Concrete Dinosaur – a IPA (Chris enjoyed it, and I let him have it (it was okay)), Northern Hawk Owl – a smooth red ale, CEO Stout – a yummy coffee stout, and Apple Pie Whole – a nice subtle fruit beer.

After 45 minutes, our tour guides came around and gathered us back outside. We got back on our bikes and rode onto the next one – The Filling Station. 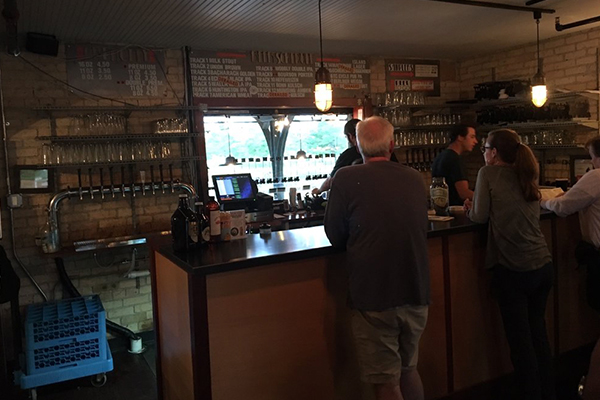 I ended up getting their brown ale, which was pretty good, but Chris and Stephanie won at this brewery. My cousin got the Green Line, a delicious cider that wasn’t too sweet, and Chris got the Savannah Peach Kettle Sour… With a shot of red (raspberry). Wow. Nice and light for the hot day we were experiencing, but had that nice raspberry taste at the end of every sip.

Unfortunately I did not get any photos of our kayak. Chris and I ended up sharing a tandem kayak. We started off in Lake Michigan and made our way through a small waterway to the third brewery – Rare Bird. 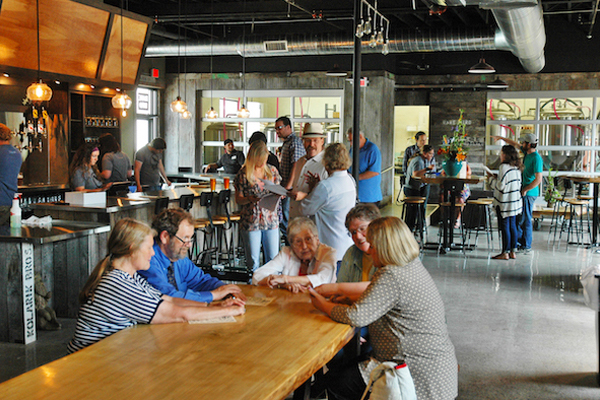 After some time on the water and also probably because of the fact that it was the afternoon, we needed some food. Our tour guide suggested their nachos and cheese curds. We were all very happy we followed her advice. The food was amazing, and I throughly enjoyed my Chief’s Coconut Brown – a nice brown with a light coconut finish.

We finished our trip on the water back towards the beginning of our tour. Chris and I encountered our first, and only, tiff when we got stuck under a bridge with many pillars. We were able to get through it together though and finish at The Workshop Brewing Company. 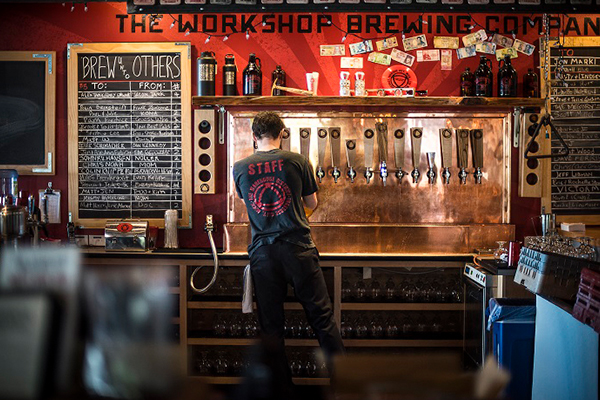 We were able to cool off in the nice A/C as we sipped on their Bastard Rasp – a golden ale with a slight tart, fruity taste.

Traverse City, even in the heat, is beautiful. I hope to be able stick around in the city longer next time to enjoy more lake time as well as all the various cute shops. 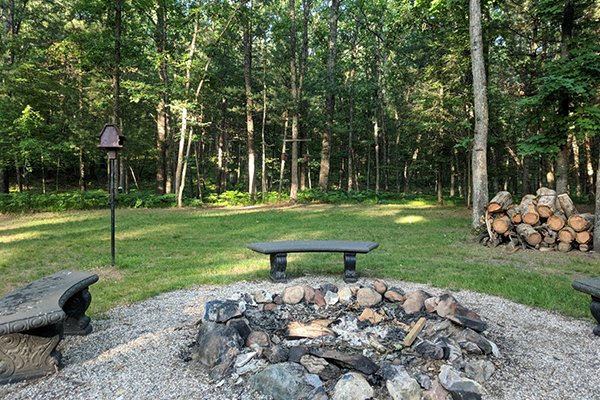 After a quick dinner, we headed to our cabin for a very relaxing evening that included s’mores and a random encounter with two glowing eyes watching us in the dark. It’s easy to say our time outside came to a close then and there, where we finished with some game boards inside. 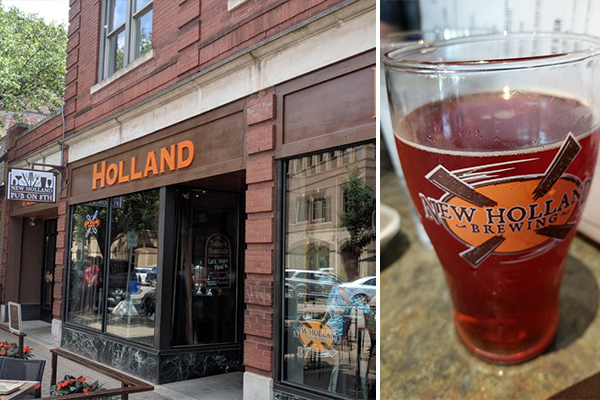 The next day, since we obviously didn’t have enough craft beer yet, we finished our trip together at New Holland Brewing Company in Holland, MI. I had the 8th Street Amber – an amber with a bit of an aztec zip at the end, and the Passion Blaster – a light, fruity beer that wasn’t too sweet. The food was great as well – if you go, get the pepperoni pinwheels. You will not regret it. And we got pretzels as well. Of course. 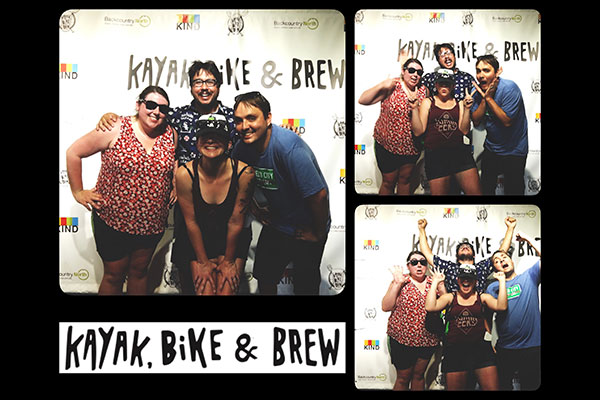 I feel super fortunate to have gotten to spend my all-too-short weekend together with these people. Until we see each other again!

PS – I’ve started collecting brewery stickers! What do you do with your stickers? 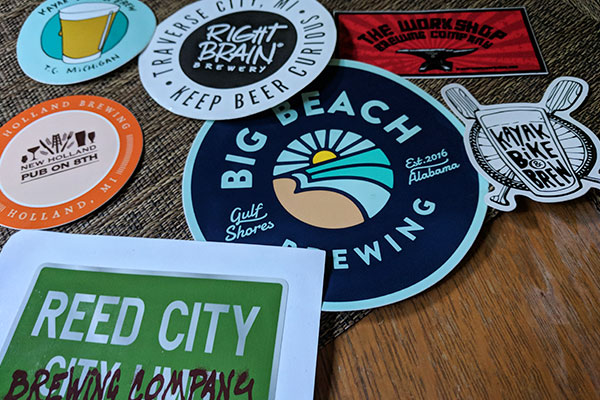