After playing through Majora’s Mask on my 3DS, it got me thinking about the other Zelda games for the DS that I never beat, and I decided to give them another go. First up: The Phantom Hourglass.

I can’t remember why I stopped playing this game. The only thing I can think of is that some other game came out, and my attention was pulled away. I didn’t get very far on my first play through, so this was basically a completely new game to me. Phantom Hourglass takes place directly after Wind Waker, and has the same art style to it. You are once again sailing around the ocean from island to island, but this time are chasing after the elusive ‘Ghost Ship’ that has taken Tetra. You end up running into a traveler named Linebeck and it’s his ship that you travel around on as you adventure onward. 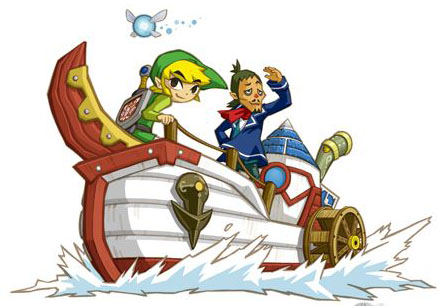 One major difference from Wind Waker? You can change out the parts of your ship! As you complete side quests and salvage buried treasure from the bottom of the ocean, you will come across new parts which you can equip. There are certain combinations that will give your ship more hearts, which is a little more motivation outside of making your ship look cool. I enjoyed this way more than I probably should have.

The only real problem I had with the game is how gimmicky it is. This game was clearly designed to show off all the features of the DS and they felt forced at times. For instance, there are several times where you have to shout into the microphone to get a person’s attention or cause a monster to be attack-able, and I found it rather annoying (especially when I was playing late at night). That goes double for having to use the stylus to attack all the time. JUST LET ME PUSH A BUTTON, DAMN IT!

I wouldn’t say the story is fantastic, as it’s the standard Zelda style adventure, but I’m also not complaining. You kill monsters, you find things, then you kill more monsters, and you find more things. All while trying to save Zelda and restore order to the world. I suppose the ‘If it isn’t broke, don’t fix it’ rule applies here. Again, no complaints.

Overall it was a good, but gimmicky, game. I’m sure had I played it 7 years ago when it came out, I wouldn’t have minded all the ‘features’ it was showing off, but it feels really dated now. If you’re a huge Zelda fan like myself, I’d definitely say give this game a play through, but if you’re not, I’d say skip it as it’s nothing to write home about.